I haven’t found any official docs about publishing ASP.NET 5 applications to Azure using source control (continuous deployment), but I thought I’ll give it a try. I failed at first and I asked whether it’s even possible on Twitter:

Hi @michaldudak that's a very good question. We have taken the liberty of creating a forum for you: http://t.co/8C58Vewj3C

The answer I got shown that it’s not something that everybody has already tried to do, so I put on my adventurer’s hat and started exploring.

I knew it should be possible somehow – recently an article about asp.net web app deployment appeared on MSDN. It suggests using Visual Studio Online or TFS. However, I wanted the deployment process to be simpler – Azure supports deployment from a source control system, so let’s figure out how to deploy an ASP.NET application to Azure using Git or Mercurial.

Lets’s start with something very simple – a single-project application at the root of the repository: 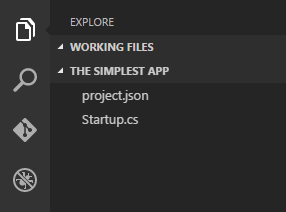 Fortunately and surprisingly, deploying it to Azure using git (or hg) just works out of the box. There is a lot of articles on the internet about setting up git deployment, so I’ll describe it very briefly.

This was easy, wasn’t it? Of course if our application had more classes or static files, this approach would also work.

Speaking of static files – most likely at some point you’d need to run some tasks during deployment, be it LESS to CSS compilation, script bundling, minification, image optimization, etc. These are commonly defined as Grunt or Gulp tasks. I’m not going to explain how to make these (a lot has been written about these topics), just how to run them as part of the deployment process. Again, this isn’t hard at all. The project.json file may contain a scripts section that specifies things to run during different stages of build process. Let’s take advantage of it, and run our tasks this way:

Here I hooked into the postrestore event, which means my commands will be run after the project’s NuGet packages are restored. These packages are being restored automatically by the deployment engine (more on this later in this article), so we can be sure this code will execute. It’s important to run npm install first, to download the necessary npm packages. Then I’m running the build Grunt task (which I defined in the gruntfile).

Running Gulp tasks or installing Bower components would look very similar (in fact you can run any command that does not require admin privileges here).

Rarely our applications are so simple. More often we’ll have solutions with multiple projects (without a single project.json in the root of the repository). Let’s consider the following directory structure: 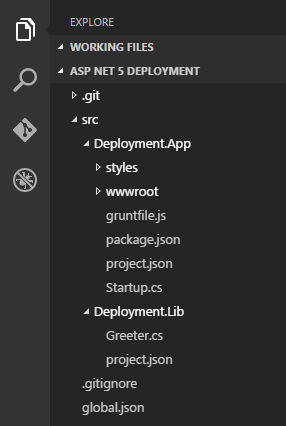 As you can see, the src folder with two projects was introduced. Here the deployment won’t Just Work™. This is why my first attempts failed. The deployment engine can’t find the web project inside the directory structure. We need to give it a hint where the main project is located. To do this, we have to create a file called .deployment (note the dot at the beginning) inside the repository root. Its syntax is described in the documentation. For now, we need to specify the project path like this:

It means “look for my main project inside the src/Deployment.App folder”. Specifying this setting should heal our build and the website should be available on Azure.

This technique is also required when the solution consists just of one project hidden somewhere inside folder structure (e.g. if in the previous example we had just the Deployment.App project under src folder, we would have to provide the .deployment file as well).

These were the basics. Now, on to some technical details…

The engine that’s handling the source-control based deployment is Kudu. It’s an open source project hosted on GitHub. It uses the deployment script generator which is a part of the Azure CLI. There are several predefined templates of this script, but developers also have the possibility to modify it or even create one from scratch.

In the Azure portal you are able to see details of each deployment. Just click on the particular deployment and another panel will appear.

As you can see, one of the steps of the deployment process is script generation. Clicking on View Log opens another panel that shows the exact command used to generate the script. Wanna take at look at what’s generated? No problem. You’ll need to access the web app’s console. There is a Console button on the web app panel, but I don’t recommend it. The better way is to install the Site Admin Tools extension (its console is far better than the default one). To do this, open the All settings panel (it’s inside the Essentials section of web app panel), select Extensions, then Add and finally select Site Admin Tools from the list. Once it’s installed, it’ll appear on the Extensions list. Just select it and click Browse to open the admin panel. One of its features is the Debug console, which we’ll use to browse through the files on the web app’s machine.

The file we’re looking for is located in D:\home\site\deployments\tools\deploy.cmd. You can either download it or display its contents in the console with the help of type command. By examining it you should be able to see what’s going on after the commit is pulled on the Azure machine:

Developers are allowed to replace the default deployment script with a custom one. You’d usually want to generate a default one and then modify it to your needs. It should be noted that there are some restrictions, however – the script does not run under elevated privileges.

First of all, you need to install the Azure cross-platform CLI tools. It’s required to generate the deployment script. Once you install them, run azure site deploymentscript --aspNet5 <path to the project.json file>. This will generate two files: .deployment and deploy.cmd. The deploy.cmd should look like the default one found on Azure machine (actually, currently the local script installs KRE and KVM instead of DNX and DNVM; the script running on Azure uses the new versions; hopefully they’ll update the azure CLI to use the new tools soon).

You are free to modify any of these steps, but probably most often you’d want just to add an additional one. The official docs highlight some common use cases. If Kudu sees a custom deployment script, it will use it instead of its default one.

It turned out that Azure can handle ASP.NET 5 applications without much effort from developers. Whether we’re trying to push a simple application or something more complex, it should be pretty simple. We also have the possibility to customize the deployment process to some degree.

Have fun playing with it and exploring!