Docker is gaining popularity among .NET developers thanks to ASP.NET Core running on Linux. With native container support in Windows Server announced last summer, this popularity is expected to increase even more. In this article I’ll show how to start using containers technology with .NET by deploying ASP.NET Core applications to Docker.

Creating the Docker host in Azure

Assuming we have an application to deploy, the first step is to create a virtual machine that will be used to host Docker containers. Fortunately Visual Studio makes it very easy thanks to the Tools for Docker extension (it’s still in preview at the time of writing but works quite well most of the time). It adds Docker Containers option to the project publishing dialog. 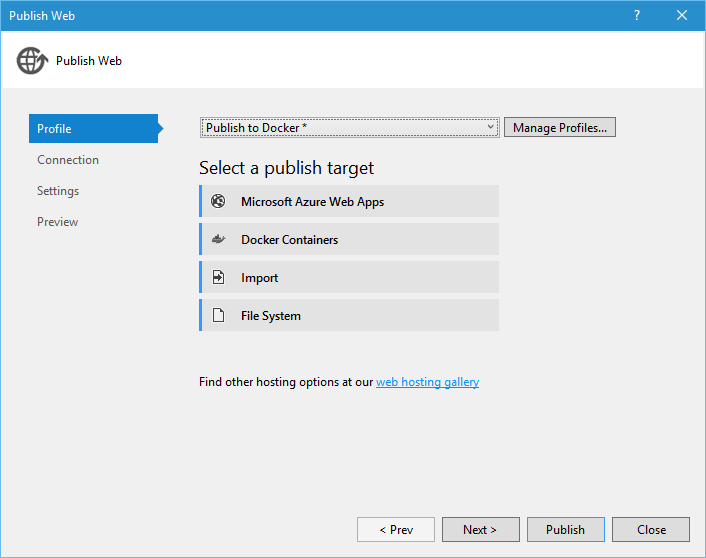 When Docker Containers are selected, the Publish dialog allows to either choose an existing virtual machine from a linked Azure subscription, create a new machine or use a custom Docker host (i.e. outside of Azure). In this post I’ll focus on creating a machine in Azure.

The next step is to provide the basic settings of the VM. For the operating system we can select either Linux (Ubuntu or CoreOS) or Windows Server 2016 (the only Windows host that natively supports containers). At the time of writing Windows Server had quite a few bugs and limitations but it was usable enough to host ASP.NET Core applications, so feel free to give it a try. I highly recommend reading the containers section on MSDN if you are interested in Windows Containers. 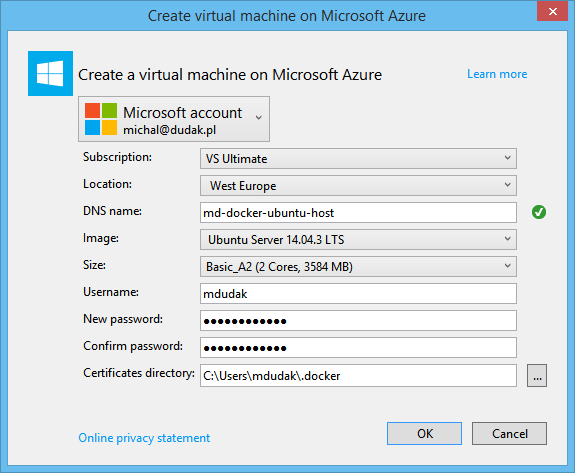 As for Linux, I find Ubuntu Server 14.04 LTS working the best (I had some trouble provisioning Ubuntu 15.* versions and I haven’t tried CoreOS yet).

All the other options should be pretty straightforward for anyone who had ever created a virtual machine in Azure. Just the last textbox may be a bit confusing – Certificates directory. Docker client needs cryptographic certificates to be able to securely connect to the remote host. The Visual Studio extension thankfully takes care of creation of these certificates (in the specified directory), so we don’t have to think of it. It also places the server certificates on the remote host.

Clicking the OK button will not publish anything yet. Visual Studio will create a powershell script necessary to create the virtual machine on Azure, then it will execute it. The script sets up the certificates and creates a resource group using an ARM (Azure Resource Manager) template contained in the two JSON files generated by VS. Having these scripts allow us to create VMs and associated resources outside from Visual Studio, what makes them perfect to use on continuous integration servers.

Once the host machine is ready, it’s time to prepare, upload and run the application container. This can be achieved using either Visual Studio or Docker commandline client. I’ll describe both options: 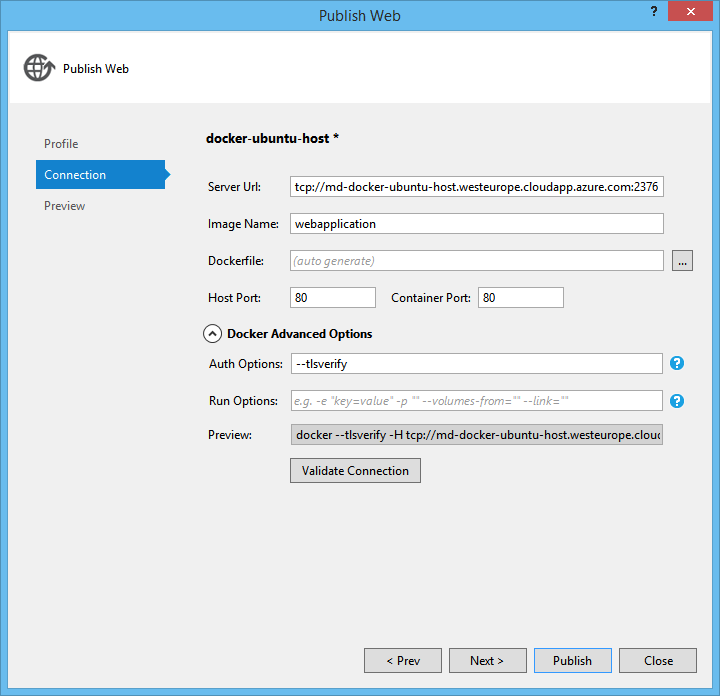 Visual Studio will generate a Dockerfile during the deployment process. It’s a simple text file containing instructions on how to build the image. Let’s take a look at the generated Dockerfile:

The FROM keyword specfies the base image of our container. Microsoft publishes these images with each release of ASP.NET Core. It’s basically a Debian image with all the bits and pieces required to run ASP.NET Core applications. There are two flavors of the microsoft/aspnet image – Mono- and CoreCLR-based.

The second line, ADD . /app, copies the application files into the container, so that we’ve got something to run. Then, a working directory is set to /app/approot.

Finally, the Dockerfile specifies the command to run when the container starts – in this case ./kestrel (it’s relative to the working directory). However, when we browse through the local application sources, there is no kestrel command, nor the approot directory. So where does the Dockerfile point to? The answer is pretty simple – prior to building the image, Visual Studio publishes the project to a local directory. This creates the approot directory and a couple of scripts inside it. Then, Docker builds the image based of the locally published application, not the source code. If you take a look at the VS output window during publishing, you will see all the steps I described.

When Visual Studio is not available, it’s still possible to deploy the application. We just have to manually do everything Visual Studio does when deploying:

And that’s basically it. All these steps can be scripted and executed in CI environment to create continuous deployment. If the application uses standard output for logging, we can stream these logs by executing docker logs --follow <container id>. Of course it’s possible to stop or restart the container, run another instance of it, and so on. Please take a look at Docker docs for more details.