This article was updated for Visual Studio 2017.

Today, a short note on how to set up Visual Studio as a diif and merge tool in SourceTree and Git client. It’s not commonly known that this IDE may be used for resolving merge conflicts, but as you’ll see it’s very simple to set up.

First, open up the options window and go to Diff tab. 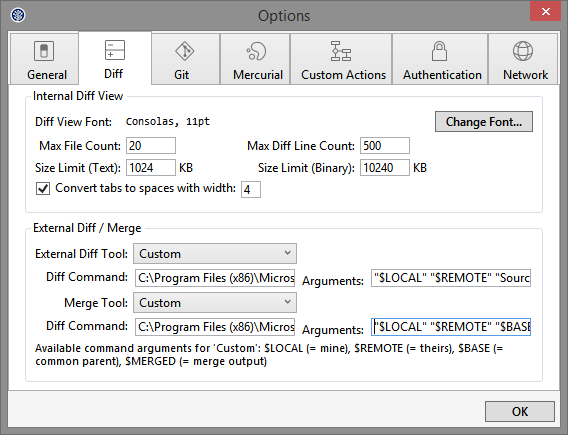 Change both External Diff Tool and Merge Tool to Custom. In the Diff Command field enter the full path to the vsdiffmerge.exe. For VS 2015 and below you can find it in the Visual Studio installation folder, under Common7\IDE subfolder. Visual Studio 2017 has it slightly more hidden. Look under Common7\IDE\CommonExtensions\Microsoft\TeamFoundation\Team Explorer.

As for the arguments fields, type in the following:

Click OK, and And that’s it! Now whenever a merge conflict occurs, you’ll be able to resolve it using Visual Studio.

The only downside I found is that vsdifftool may take quite some time to start up. But if you don’t close it after diffing each file, it’ll work like a charm.

You can now use these to tell the commandline Git to use these when viewing a diff or merging. It’s as simple as executing two git commands:

Doing so is of course perfectly possible even without SourceTree. Just add the difftool and mergetool entries to your .gitconfig file (it should be located in your home folder) and execute the two git config commands shown above.